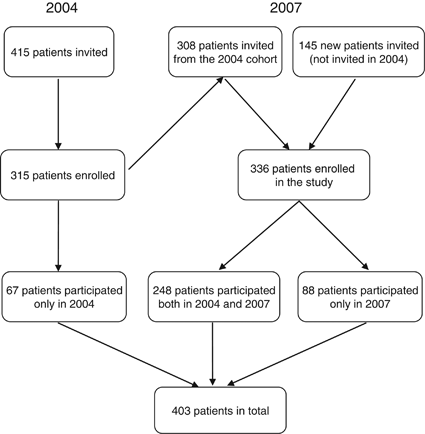 Fatigue is one of the most frequent complaints among breast cancer survivors. However, mechanisms underlying persisting fatigue after end of treatment are poorly understood. To explore whether biological processes underlying persistent fatigue can affect gene expression of blood cells, genome-wide expression analyses were performed on whole blood samples from breast cancer survivors classified as chronic fatigued 2-6 years after diagnosis. Non-fatigued survivors served as controls. Several gene sets involved in plasma- and B-cell pathways differed between the chronic fatigued and the non-fatigued, suggesting that a dysregulation in these pathways is associated with chronic fatigue and that a B-cell-mediated inflammatory process might underlie fatigue. The chronic fatigued also had a higher level of leucocytes, lymphocytes and neutrophiles compared with the non-fatigued, thus further indicating that an activation of the immune system plays a role in the biology of chronic fatigue in breast cancer survivors.