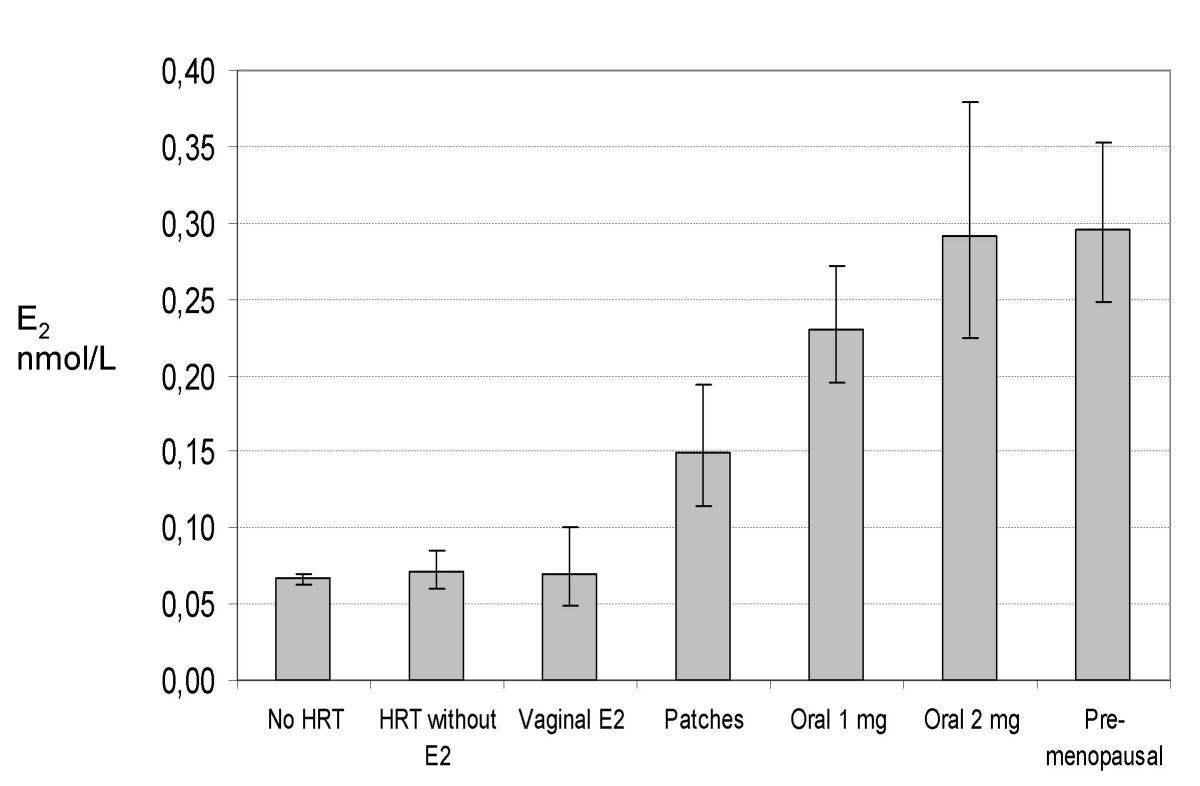 Hormone replacement therapy use (HRT) is associated with increased breast cancer risk. Our primary objective was to explore hormone levels in plasma according to HRT use, body mass index (BMI) and menopausal status. A secondary objective was to validate self-reported questionnaire information on menstruation and HRT use in the Norwegian Women and Cancer postgenome cohort (NOWAC).

We conducted a cross-sectional study of sex hormone levels among 445 women aged 48-62 who answered an eight-page questionnaire in 2004 and agreed to donate a blood sample. The samples were drawn at the women’s local general physician’s offices in the spring of 2005 and sent by mail to NOWAC, Tromsø, together with a two-page questionnaire. Plasma levels of sex hormones and Sex Hormone Binding Globulin (SHBG) were measured by immunometry. 20 samples were excluded, leaving 425 hormone measurements.

20% of postmenopausal women were HRT users. The plasma levels of estradiol (E2) increased with an increased E2 dose, and use of systemic E2-containing HRT suppressed the level of Follicle Stimulating Hormone (FSH). SHBG levels increased mainly among users of oral E2 preparations. Vaginal E2 application did not influence hormone levels. There was no difference in BMI between HRT users and non-users. Increased BMI was associated with increased E2 and decreased FSH and SHBG levels among non-users. Menopausal status defined by the two-page questionnaire showed 92% sensitivity (95% CI 89-96%) and 73% specificity (95% CI 64-82%), while the eight-page questionnaire showed 88% sensitivity (95% CI 84-92%) and 87% specificity (95% CI 80-94%). Current HRT use showed 100% specificity and 88% of the HRT-users had plasma E2 levels above the 95% CI of non-users.

Users of systemic E2-containing HRT preparations have plasma E2 and FSH levels comparable to premenopausal women. BMI has an influence on hormone levels among non-users. NOWAC questionnaires provide valid information on current HRT use and menopausal status among Norwegian women who are between 48 and 62 years old.